Nov. 27: The deal is a one-year contract reportedly worth $7MM, per Alex Speier of the Boston Globe (via Twitter). That would be a raise for Wacha, who signed last offseason with the Rays for a $3MM guarantee. The deal has been made official, per Chelsea Janes of the Washington Post (via Twitter).

Nov. 26: The Red Sox are finalizing a one-year contract with Michael Wacha, reports Jeff Passan of ESPN (Twitter link). The deal is pending a physical. Wacha is represented by CAA Sports. 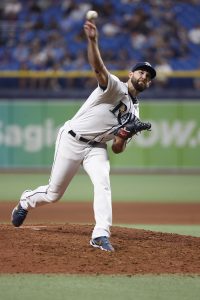 Wacha spent the 2021 campaign with the division-rival Rays. Working primarily as a starter, he tossed 124 2/3 innings across 29 appearances. Despite a league average 22.9% strikeout rate and a solid 5.9% walk percentage, the 30-year-old had trouble keeping runs off the board. Wacha pitched to a 5.05 ERA, largely on account of the 23 home runs (1.66 homers per nine innings) he surrendered.

That’s become somewhat familiar territory for Wacha, who has struggled with longballs in each of the past three seasons. He’s allowed a higher than average homer rate every year since 2019, with an ERA of 4.76 or higher in each season. Since the start of the 2019 campaign, Wacha owns a 5.11 ERA/5.07 FIP across 285 1/3 frames. While his strikeout and walk numbers have been fine, he’s not been able to effectively compensate for that home run trouble.

Nevertheless, Wacha has continued to draw interest as a buy-low target for clubs. The right-hander was an effective mid-rotation starter with the Cardinals earlier in his career, even earning an All-Star nod during a 2015 season in which he worked 181 1/3 innings of 3.38 ERA ball. Despite being a nine-year big league veteran, he’s still relatively young, not turning 31 until next July.

While Wacha’s results have gone backwards in recent years, his fastball still averages a solid 93.8 MPH. He’s also coming off his second consecutive season with a career-best swinging strike rate, as he’s generated whiffs on a bit more than 11% of his offerings over the past two years. That’s a hair better than the 10.9% league average for starters.

Financial terms remain unreported, but it’s unlikely Wacha’s deal will have a huge impact on the rest of the club’s offseason. The Sox have been known to be targeting rotation help this winter, particularly in the wake of Eduardo Rodríguez’s departure. Wacha can offer some back-of-the-rotation depth, but it’s also possible Boston bumps him into a multi-inning relief role depending on the rest of the club’s dealings. Chris Sale, Nathan Eovaldi and Nick Pivetta are locks to open the season in the rotation, while Tanner Houck, Garrett Whitlock and Connor Seabold are potential candidates for either back-of-the-rotation or bullpen roles.

Should you start either Ravens RB in Week 12?

Is Errol Spence too shark-like for Terence Crawford?

Where to find São Paulo FC vs. Palmeiras on US TV

Hagler vs Leonard: The narrative of a superfight

Richard Commey could made to order for Vasiliy Lomachenko