1:00pm: The Pirates and Perez have agreed to a one-year contract, tweets ESPN’s Jeff Passan. The MDR Sports Management client will be guaranteed $5MM on the contract, Jason Mackey of the Pittsburgh Post-Gazette further reports (Twitter link).

11:08am: The Pirates are in talks with free-agent catcher Roberto Perez, tweets Ken Rosenthal of The Athletic. Pittsburgh has an obvious need behind the dish after trading Gold Glover Jacob Stallings to the Marlins yesterday. Perez would give them a defensive-minded backup with some power in his bat — albeit one who has struggled mightily while battling injuries in Cleveland over the past two seasons. The Guardians declined their $7MM option on Perez following the season. 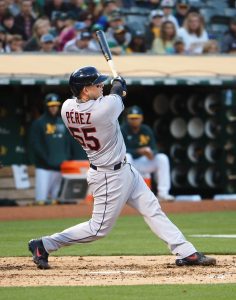 Perez missed significant time in 2020-21 due to a pair of shoulder injuries and a fractured ring finger. It’s certainly plausible that the shoulder and hand injuries contributed to his decline at the plate, but the 2019 season looks increasingly like an outlier campaign for a defensive-minded backstop.

While Perez may not have stacked up to Stallings’ defense in 2021, he’s a two-time Gold Glove winner himself, taking home the American League award at catcher in both 2019 and 2020. Perez had never posted a season with negative marks in Defensive Runs Saved or FanGraphs’ pitch framing prior to 2021 but did rate ever so slightly below par in both categories. Of course, he was limited to 364 innings and wasn’t at 100% health this past season, and his body of work behind the dish is otherwise stellar.

From 2017-20, Perez’s 55 DRS ranked not only tops among all catchers but fifth among all players in Major League Baseball — regardless of position. He also led the American League with a gaudy 41% caught-stealing rate in 2019 and led all of baseball with a borderline-comical 71% caught-stealing mark in 2020 — nabbing 10 of the 14 runners who tried to take a base against him. Even with a lowly 16% mark in 2021, Perez still has a 39% mark in his career. And, given that the pair of shoulder problems he’s had recently (one in 2020, one in 2021) were in his throwing shoulder, it’s eminently plausible that he could rebound in that regard with better health in 2022.