The Nationals announced they’ve signed second baseman César Hernández to a one-year contract. It’s reportedly a $4MM guarantee for the Octagon client that contains an additional $1MM in available incentives. 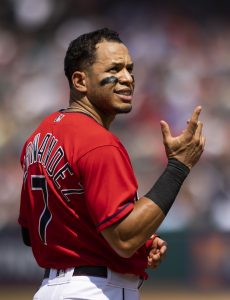 Hernández returns to the NL East, where he spent the bulk of his career with the Phillies. The switch-hitting infielder broke into the majors in 2013, taking hold of the Phils’ regular second base job by 2015. He spent the next five seasons as a solid regular. Hernández didn’t bring a ton of power to the table, but he drew plenty of walks, put the ball in play and rated as a plus defender at the keystone.

Philadelphia was happy to keep Hernández for the early stages of his career, but they non-tendered him after the 2019 campaign as his arbitration salaries escalated. The Venezuela native signed with Cleveland that offseason, hitting at a solid .283/.355/.408 clip in the shortened season. They brought Hernández back last winter, and he continued to produce — albeit in a completely different manner than he had previously.

Over 420 plate appearances, Hernández popped a career-best 18 homers. But he also saw his batting average fall to a personal-low .231 as he became more fly-ball oriented. That led to a corresponding drop in on-base percentage, although his power uptick kept his overall numbers right around league average. The White Sox acquired Hernández at the trade deadline in the wake of Nick Madrigal’s season-ending hamstring injury, hoping he’d solidify the keystone for the stretch run.

That proved not to be the case, as Hernández sputtered to a .232/.309/.299 line with only three homers in 217 trips to the plate with Chicago. Given those struggles, it’s not surprising the Sox elected to decline his $6MM club option and look elsewhere at the position this winter.

Hernández won’t quite match that salary on his deal with the Nats, but he has a chance to come fairly close if he maxes out all the incentives. He’ll offer some short-term veteran stability to a Washington infield that also features Josh Bell at first base and Alcides Escobar, Carter Kieboom and Luis García around the diamond. The 21-year-old García had been pencilled in as the regular at second base. With the Nats retooling, it’s unlikely they’ll cut into his playing time. García has ample minor league experience at shortstop and could conceivably kick back across the bag to accommodate Hernández while relegating Escobar to a utility role.

Jesse Dougherty of the Washington Post was first to report the Nationals’ interest in Hernández. Jon Heyman of the MLB Network first reported the contract terms.

Should fantasy managers add him in their leagues?

James Pearce on the pursuit of Tchouameni and Bellingham

Analytics on Diaz will have opposition frightened at Jota…