I Did Nothing Disrespectful To Tsitsipas 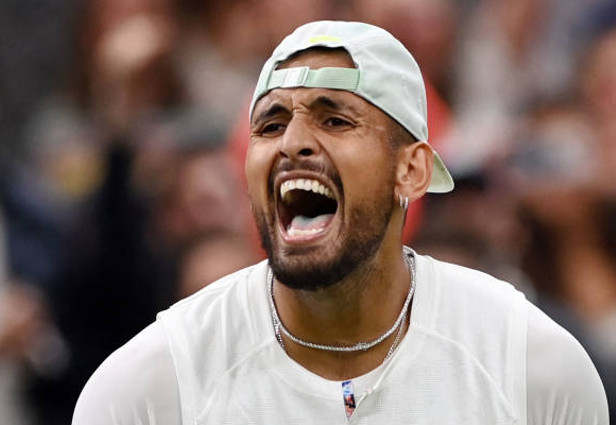 Nick Kyrgios can be a hell raiser or magic maker on court.

Today, the explosive Aussie was both.

The mercurial Kyrgios rode his massive serve and major mind games to topple fourth-seeded Stefanos Tsitsipas 6-7(2), 6-4, 6-3, 7-6(7) in a wild, crazy and contentious Clash on Court No. 1.

The match saw Kyrgios deploy the underarm tweener serve, some superb drop shots and near constant chatter that unnerved Tsitsipas. The Greek spent a few games trying to tag Tsitsipas and eventually drilled the Aussie in the chest.

It didn’t end at match point.

Tsitsipas called Kyrgios out as a bully in his post-match presser. Kyrgios laughed off the bullying charge saying “I did nothing towards Stefanos today that was disrespectful.”

“I was actually like — apart from me just going back and forth to the umpire for a bit, I did nothing towards Stefanos today that was disrespectful, I don’t think. I was not drilling him with balls.A fired-up Kyrgios threw his entire arsenal—and nearly ever gamesmanship card in the deck—to beat the Greek for second time on grass in the last three weeks.

Afterward, Kyrgios delivered a message for his critics and the media:I fill stadiums and bring buzz to the sport.

“Everywhere I go it’s full stadiums,” Kyrgios said in his on-court intervew. “The media love to write that I’m bad for the sport, but clearly not.”

The victory comes less than three weeks after the explosive Kyrgios charged through 12 of the final 13 points stopping the second-seeded Tsitsipas 5-7, 6-2, 6-4 on the grass of Halle.

Krygios, the tennis version of Mayhem from the All State commercials, asserts tennis needs edgy personalities like his to grow the game.

Critics say that’s spinning what Kyrgios does in strong-arming officials and opponents with his oubursts.

Tsitsipas counters Kyrgios, who spit in the direction of a fan after his opening-round win over Paul Jubb, is a bully prone to degrading chair umpires and linespeople and disrespecting opponents with constant complaining.

“It makes no sense. You are out there to do your job,” Tsitsipas said. “Tennis is “the” most important thing that we are doing out there.

“Every single point that I played today I feel like there was something going on on the other side of the net. I’m not trying to be distracted by that, because I know it might be intentional, because for sure he can play other way. And that’s his way of manipulating the opponent and making you feel distracted, in a way.

A frustrated Tsitsipas belted a ball into the crowd at one point, narrowly missing a fan, which prompted Kyrgios to ask the chair umpire default the Greek.

Afterward, Tsitsipas said he apologized to fans and conceded the Kyrgios circus caused him to snap.

“I think also he’s part, you know, with all the circus show going on on the other side of the net,” Tsitsipas said. “It started to become very tiring, in a way. You know, it’s just like that happened. I didn’t hit any people. It did hit the wall, thank God. For sure I’m never doing that again. It’s my responsibility, for sure.

“But there was also something that created that behavior that I’m not used to see myself.”

Dodgers: Tony Gonsolin Needs to Be the All-Star Game Starter

What time does it start and how to watch

This is 50: Record-breaker Alicia Ashley on the key to…

Editor’s Letter: Another call for unity

Is Dillian Whyte preparing to pull out of Tyson Fury fight?

Remarkable statistic about Alexander-Arnold and Robertson

Panel: How do you see Terence Crawford vs Shawn Porter…