NOVEMBER 30: The Giants have announced an agreement with Cobb on a two-year deal. It’s a $20MM guarantee, reports Ken Rosenthal of the Athletic (on Twitter). The deal also contains a 2024 club option, per Alex Pavlovic of NBC Sports Bay Area (Twitter link).

NOVEMBER 29: The Giants are finalizing agreement with free agent starter Alex Cobb, reports Jon Heyman of the MLB Network (Twitter link). Susan Slusser of the San Francisco Chronicle reported the club was making a strong run at the right-hander last week. Cobb is represented by the Beverly Hills Sports Council. 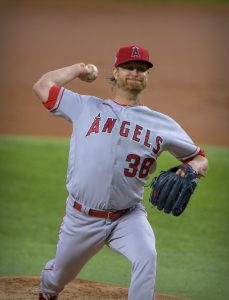 Cobb spent the 2021 campaign in Orange County, after the Angels acquired him from the Orioles last winter. It was an eyebrow-raising move at the time, since Cobb had struggled with both injuries and underperformance over his three seasons in Baltimore. The ten-year big league veteran rewarded the organization’s faith, though, tossing 93 1/3 innings of 3.76 ERA/3.83 SIERA ball across 18 starts.

Along the way, Cobb generated more whiffs than he ever had before. His 11.2% swinging strike rate and 24.9% strikeout percentage were both career-best marks, each checking in a touch above the respective league averages for starting pitchers. Cobb paired that uptick in whiffs with his typically robust ground-ball tendencies (53.3%) and solid control (8.4% walk rate) en route to a nice season.

Cobb’s run prevention numbers were partially propped up by one of the league’s lowest home run rates (0.48 per nine innings). It’s unlikely he’ll continue to be quite that successful keeping the ball in the yard moving forward. But Cobb’s blend of average or better whiffs, control and grounders should allow him to be a solid back-of-the-rotation option even if his homer rate regresses. The bigger concern might lie in his health, as he had separate injured list stints this past season due to blisters and right wrist inflammation. Cobb didn’t seem any worse for wear after returning from his time on the IL, though, with the velocity on all of his offerings remaining intact during his final few outings of the year.

The Giants entered the offseason known to be targeting rotation help. Only Logan Webb remained under club control from the team’s primary five this past season. They’ve already re-signed Anthony DeSclafani and reportedly were nearing agreement to bring Alex Wood back. Kevin Gausman’s departure to the Blue Jays leaves one prominent vacancy, though, and teams often have to rely on seven or eight starters to navigate the injury attrition of a full season.

There’d be room for further additions to the rotation even if Cobb’s deal does get across the finish line, and there should be plenty of spending capacity with which to do so. Cobb’s two-year, $20MM guarantee narrowly tops MLBTR’s two-year, $16MM forecast entering the winter.

The Giants only have a little more than $105MM in estimated 2022 commitments, according to Jason Martinez of Roster Resource. For a franchise that has logged player payrolls in the $200MM range in the past, a fairly modest Cobb signing shouldn’t be especially prohibitive to the club’s future goals.

Klopp urges Liverpool not to lash out in revenge at Everton

Sadio Mane joins up with the Senegal squad ahead of AFCON

Will Desmond Ridder Go in the First Round?

Frankie Montas To Start For A’s On Thursday

49ers Vs. Rams Prop Bets For Monday Night Football Include…

Top 2023 NFL Draft Prospects To Watch In Week 2 Include…

Matt Ryan finding chemistry with a rookie TE, the defense…

PSG fans whistle their players, with exception of Mbappe