By Matt Lieberman: George Kambosos Jr. (20-0, 10 Kos) pulled off one of the biggest upsets in memory on Saturday night in defeating undisputed lightweight champion Teofimo Lopez )16-1, 12 KOs) by a 12 round split decision win at the Hulu Theater at Madison Square Garden in New York City.

Kambosos put on a masterclass performance in winning by the scores 115-111, 115-112 for Kambosos, and 114-113 Teofimo. The 28-year-old Australian Kambosos knocked Teofimo down in the first and later dropped him in the tenth.

After the fight, Kambosos offered Teofimo a rematch in Australia in front of 80,000 fans, but he didn’t accept the offer. Kambosos says he’ll look in the direction of a fight against WBC lightweight champion Devin Haney if he wins his next match against Joseph ‘Jojo’ Diaz Jr. on December 4th.

“I ain’t no sore loser. I take my wins like I take my losses. I’m a true champion. I came out here, and I did what I had to do, and I went out there, and I did my best. I don’t care what anyone says. I am as real as they come.

“Watch, this is the takeover, man. We don’t stop. We keep coming. I love you all. I won this fight. ‘It’s good, good shot. Time to wake up, it’s time to do the thing that I have to do,’” said Teofimo when asked what was going through his mind after being knocked down in the first round by Kambosos. 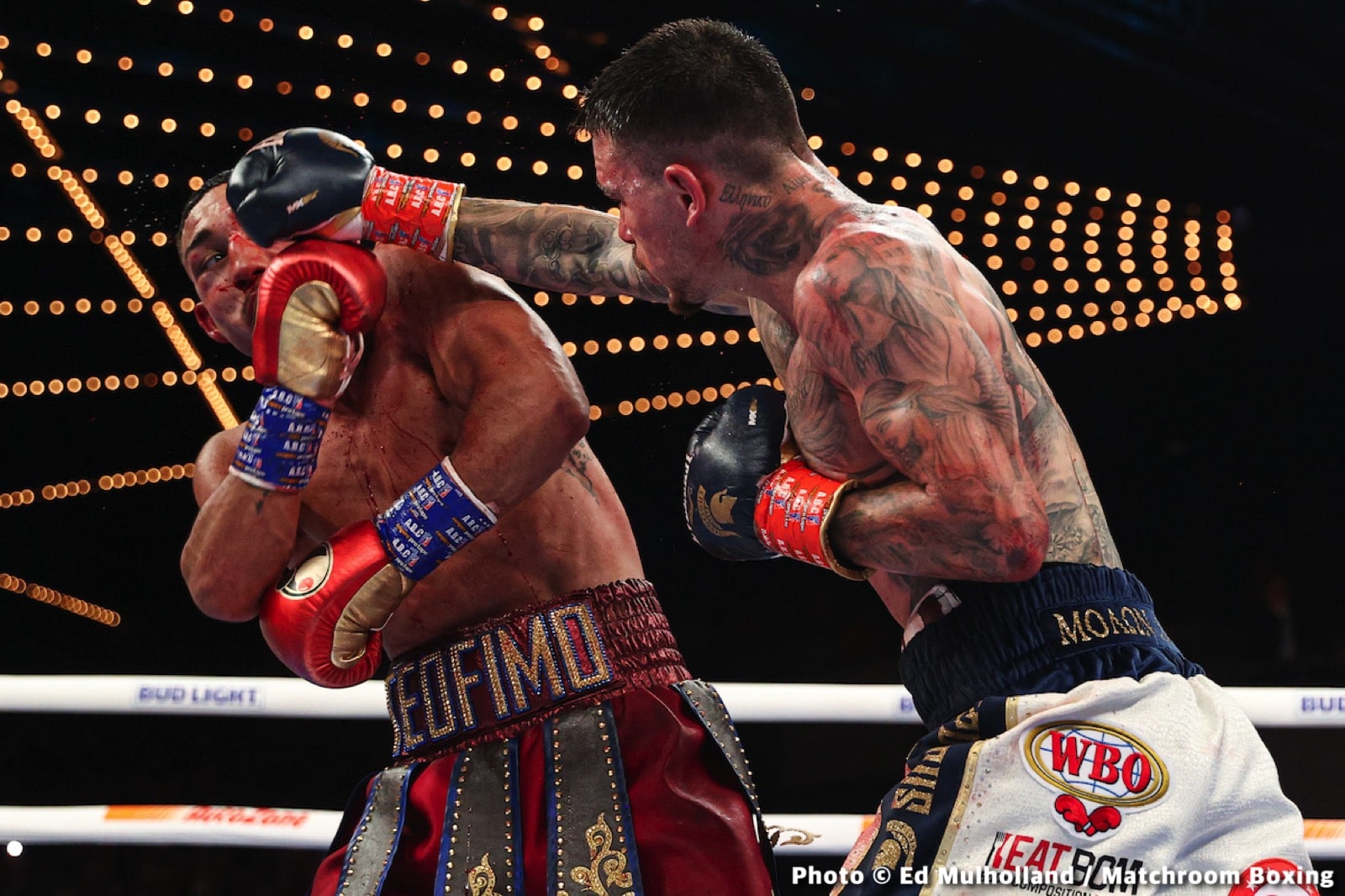 “After that, it is what it is; it’s boxing,” Teofimo continued. “But you know what, man? I know what it is, and I know how these people work. The referee knew I won tonight.

“Everybody knew I won tonight, and I’m just thankful,” said Teofimo. “No, I don’t. I don’t believe it was a close fight at all. I believe at the end of it all; I scored it 10-2. Yes, I did,” said Teofimo when asked if he believes he won ten of the twelve rounds.

Kambosos: “Listen, you got to move up, bro, because you’re a bit delusional, brother. Listen, I got the belts, I won the fight, and I won it clean and clear.

“Look at your face, but you know what? I give you respect. I came here; I gave you respect in the ring, and I won the fight. I got the belts. Take it like a champ and move on.

Teofimo: “Right now, I’m going to go back to the drawing board and spend time with my son. I haven’t spent time with my boy in a long time. He was just born 11 days ago, and that’s what really matters to me, family.

“To everybody, I apologize in advance to all of those, I wanted to be an inspiration to all of them, and I still am. Everything happens for a reason. I ain’t scared about this, and I ain’t sad about this.

“I’ve been feeling this for two years now. They’ve been training me the whole time,” said Teofimo when asked if he should move up to 140 now. “I stood here [at 135] when I should have dropped the belts like everybody else did when they won all the belts, but no excuses.

Kambosos: “Mutual respect to Devin Haney, I wish him the best next week. I’ll see how I feel. I’ll probably be there,” said Kambosos about the possibility of him attending Devin Haney’s next fight against Joseph ‘JoJo’ Diaz Jr. on December 4th in Las Vegas.”

“Look at me now; I have all the jewels. I’m the King. You’ve got your four kings. I’m the emperor because I come to every country, and I take them out, one by one. 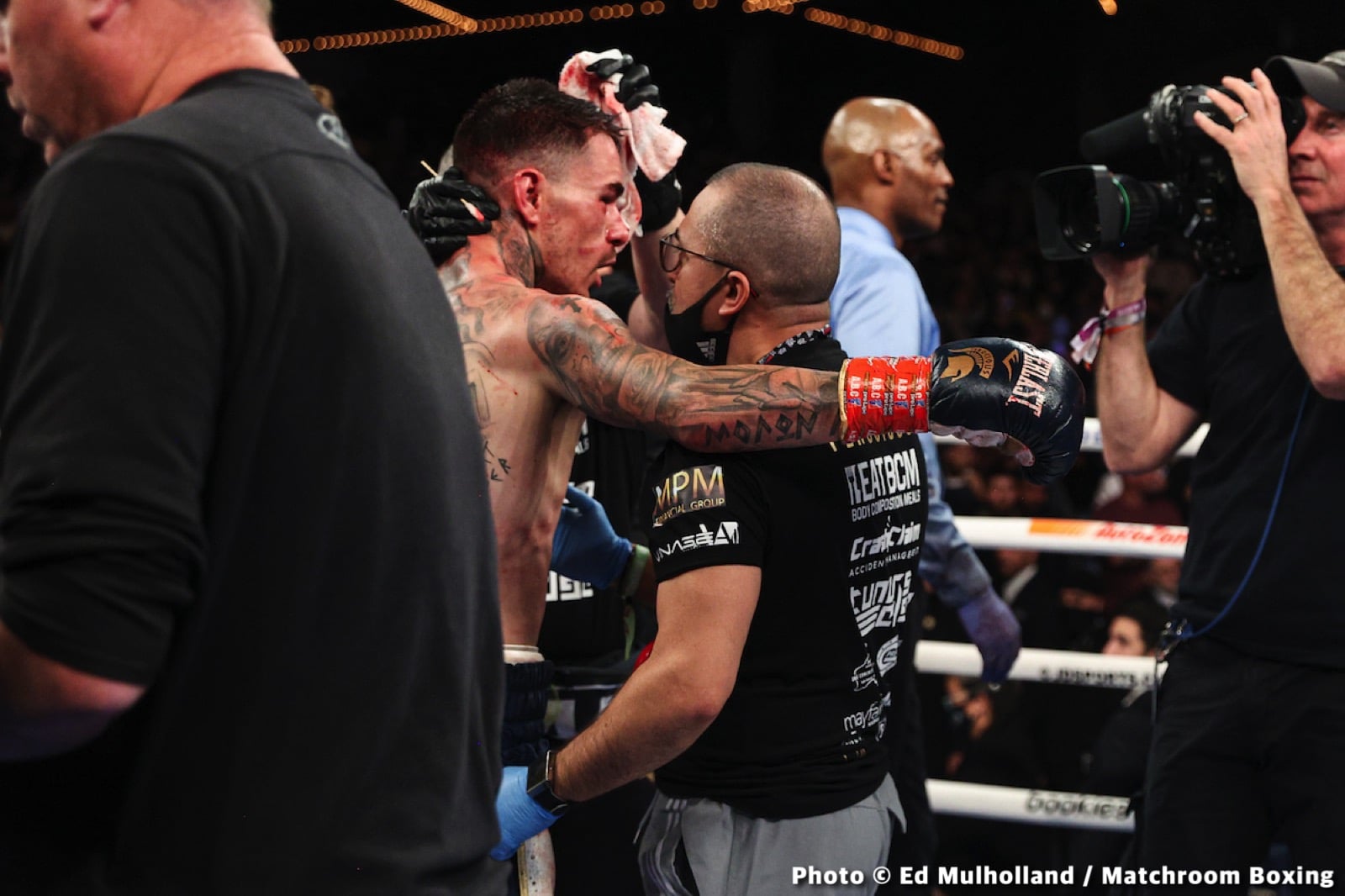 “Listen, all respect to him. Thank you, New York City and Madison Square Garden. I love you all. I had the mentality in my head that I’m going to hit this kid [Teofimo] clean, I’m going to hit him hard, and I’m going to put him down, and the fight changed after that.

“My trainers worked unbelievably in this camp. It was a long, hard camp. It was never my fault, and I wanted to fight. Every day I got better, better, and better. I learned more and more, and I didn’t take my foot off the pedal.

“All respect to Teofimo. He’s a great kid. The build-up was the build-up. We’re both young guys, but it was my night, and it’s going to be for a very long time. I’m the emperor.

“I was trying to entertain the fans. I’m an unbelievable boxer. I can’t believe how good I boxed with my defense and my movement. Too fast, too sharp, too strong.

“My conditioning and my stamina were unbelievable, but I was trying to entertain the fans a little too much, and I got caught. You know what? What a warrior.

“I got back up against all odds and still finished the fight and won the next round.

“This is for my kids, for my grandfather. He passed away two months ago. I know my grandfather is in the ring with me right now, and he said it. My family is here for everyone—my father.

“I wasn’t hurt,” said Kambosos when asked how he felt after being knocked down by Teofimo in the tenth.

“Listen, all respect to him. He’s a great champion, and he beat Vasily Lomachenko. But I’m the better fighter, and I told you that I’d be better every step of the way.

“Look at me; I’m the great fighter in Australian history. I’ve got all the belts.

Shakur Stevenson To William Zepeda: “What’s Taking You So Long To Accept…

Redknapp outlines one fixture that may cause Liverpool…

My Rock and Roll Football Story by Paul Mariner, A Review