The Rangers’ huge offseason continues, as Texas has reportedly agreed to terms with free agent shortstop Corey Seager on a massive ten-year, $325MM guarantee. The Boras Corporation client will reportedly receive a $5MM signing bonus and limited no-trade protection, but the deal does not contain any opt-out clauses. It’s the Rangers’ second big-ticket free agent infield pickup in as many days, as they also agreed to terms with Marcus Semien on a seven-year, $175MM deal yesterday. 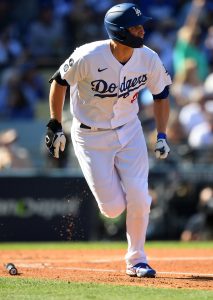 Huge as the Rangers’ investment in Semien is, the Seager deal is on a whole other level. The $325MM guarantee will tie Giancarlo Stanton’s November 2014 extension for the sixth-highest sum in MLB history (and Stanton’s was distributed over a thirteen-year term). The $32.5MM average annual value checks in eleventh all-time.

It’s an incredible investment, although that’s a testament to Seager’s blend of productivity and youth. He’ll turn 28 years old next April, making him one of the younger options available in free agency. More importantly, Seager’s one of the game’s best players — a middle-of-the-order lineup presence capable of playing shortstop. A former first-round pick and top prospect, he’s more than lived up to lofty expectations.

Seager has been an above-average bat in every season of his career, and he’s been far better than most at the plate for the bulk of that time. By measure of wRC+, he’s been at least 27 percentage points above the league average in four of his five seasons with 200+ plate appearances. Seager has been especially productive over the past two years, combining for a .306/.381/.545 line over 641 regular season trips to the plate since the start of 2020. That’s the eighth-best offensive production leaguewide (minimum 500 plate appearances) and that’s before considering Seager’s huge showing in the 2020 postseason. He was perhaps the single greatest driver of the Dodgers’ World Series run that year, winning NLCS and World Series MVP honors after popping seven homers over 57 combined plate appearances between the two rounds.

Those great bottom line results are supported by Seager’s underlying metrics. He has never struck out at a higher-than-average rate in a season, and he rarely chases pitches outside the strike zone. Seager’s 11.7% walk rate in 2021 was the highest of his career, around three percentage points better than the league mark. The left-handed hitter pairs that plate discipline with high-end raw power, consistently rating well above-average in terms of average exit velocity, hard contact rate and barrel rate (essentially how often a hitter makes hard contact at the optimal angles for power).

Any player with Seager’s offensive acumen would be in high demand, but that kind of production is particularly impressive from a shortstop. Aside from a brief stint at third base in his 2015 rookie season, Seager has exclusively played the infield’s most demanding position. Advanced defensive metrics have been mixed on his work. Defensive Runs Saved has pegged him just a touch below-average in each of the past few seasons; Statcast’s Outs Above Average rated Seager fairly well in 2019 and 2020 but pegged him as a fair bit below par in 2021.

Those metrics seem to align with the general understanding of Seager’s defense. He’s a competent if unexceptional shortstop, unlikely to either win a Gold Glove nor immediately have to move off the position. His 6’4″, 215-pound frame has led to some speculation he might kick over to third base at some point down the line, but it’s likely the Rangers envision him as a franchise shortstop for at least the next few seasons. Even if Seager eventually has to assume a less demanding defensive role, he should be more than capable of living up to the higher offensive demands of positions further down the defensive spectrum.

While there’s not much to nitpick about Seager as a player, he has dealt with a couple of significant injuries over the past few seasons. He missed the bulk of the 2018 campaign recovering from a UCL sprain that required Tommy John surgery. This past season, he suffered a right hand fracture on a hit-by-pitch that cost him two months. Seager absolutely mashed at a .335/.417/.592 clip upon returning from that most recent issue, though, likely assuaging any fears on the part of teams about his current level of health.

Seager now becomes the centerpiece of an incredible offseason for the Rangers and their fanbase. Texas brass has hinted at the potential for an active winter for months, but it wasn’t until a few weeks ago it became clear ownership might sign off on an historic spending spree. Evan Grant of the Dallas Morning News reported earlier this month that the Rangers could add $100MM to their 2022 books alone, and between the recent deals for Seager, Semien, starter Jon Gray (four years, $56MM) and corner outfielder Kole Calhoun (one year, $5.2MM), they’ve added around $76.7MM to next year’s payroll within the past 36 hours alone.

That’s in part due to the wide open payroll outlook the Rangers carried into the winter. José Leclerc ($5.25MM) is the only other player with guaranteed money on the books for 2022; Seager, Semien and Gray are the club’s only long-term commitments. Active as they’ve been, it’s certainly possible the Rangers aren’t done yet. Texas currently has around $125MM in 2022 player expenditures, in the estimation of Jason Martinez of Roster Resource. (That assumes the Seager, Semien and Gray deals are paid out relatively evenly; specific contract terms on each have yet to be reported). For a franchise that spent around $160-165MM on players in both 2016 and 2017, there could still be more funds in reserve.

Regardless of what’s to come, the past two days have marked an incredible turnaround for a franchise coming off three last-place finishes in the past four years. That’s not to say the Rangers are certain to contend in 2022. The roster still has plenty of holes, particularly in the starting rotation. Still, installing Seager and Semien into the middle infield and Gray near the top of the rotation locks in some certainty at key areas of the roster.

At the very least, the 2022 Rangers should be far better than the 60-102 team they trotted out in 2021. And Semien, Seager and Gray will all be key pieces of a club that could legitimately contend in 2023 — particularly if top third base prospect Josh Jung hits the ground running as an above-average player alongside their star middle infield.

Until Jung’s arrival, Isiah Kiner-Falefa looks likely to kick back over to third base. The 26-year-old broke in as a third baseman but acclimated well upon a move up the defensive spectrum to shortstop this past season. While the Rangers likely didn’t see displacing Kiner-Falefa as a must, the opportunity to add two members of this offseason’s stacked shortstop class ultimately proved too tempting to pass up. Semien, meanwhile, looks likely to stay at second base, where he spent the 2021 season with the Blue Jays after a lengthy run as the A’s shortstop.

The Rangers already forfeited their second-highest 2022 draft choice and gave up $500K in international bonus pool space to sign Semien, who rejected a qualifying offer from Toronto. They’ll lose another pick to sign Seager, who declined a QO from the Dodgers. Signing multiple qualified free agents in the same offseason actually makes some amount of sense, though.

The primary appeal, though, is in simply adding a pair of star players to the 2022 roster. That’s the position in which the Rangers find themselves, while Seager’s former team finds itself in the opposite situation. The Dodgers have seen both Seager and Max Scherzer (who landed a record-setting three-year deal with the Mets) land elsewhere within the past few hours. Los Angeles’ acquisition of Trea Turner from the Nationals at this past summer’s trade deadline gives them another All-Star caliber shortstop capable of stepping into Seager’s place. That could leave second base to former top prospect Gavin Lux, particularly if the Dodgers also lose utilityman Chris Taylor in free agency.

Of course, the Dodgers aren’t likely to sit idly by for the rest of the offseason. Particularly as they battle with the Giants (and potentially Padres) in a loaded NL West, it’s likely Los Angeles will continue to explore ways to bolster a still-stacked roster. In the meantime, they’ll receive a compensatory pick after the fourth round in the 2022 draft for Seager’s departure as a team that exceeded the luxury tax threshold in 2021.

Seager’s signing is the latest in a transactions flurry getting in before the looming expiration of the current CBA on Wednesday night. Seager’s and Scherzer’s departures from L.A. could have a massive impact on the NL West race, while the Rangers’ run of big-ticket acquisitions and the Mariners’ agreement on a nine-figure deal with Robbie Ray will have reverberations in the AL West for years to come.

Finally, Seager’s deal becomes a key data point for the rest of the free agent shortstops remaining, particularly Carlos Correa. While Seager and Correa were the clear top two names in this winter’s class, Correa is generally expected to command a loftier deal based on his superior defense at shortstop. Seager’s guarantee, however, comes in above MLBTR’s ten-year, $305MM estimate entering the winter. In light of the robust market we’ve seen in recent weeks, it wouldn’t be a surprise if Correa also tops his ten-year, $320MM projection whenever he puts pen to paper.

That’s particularly true in light of the Rangers signing two of the top five shortstops. The Yankees, Tigers, Phillies, Mariners and Astros are among the other clubs who could still be motivated to land a long-term infielder. That could be a boon to the markets for Correa, Javier Báez, Trevor Story and Taylor, among others.

Jeff Passan of ESPN first reported the Rangers and Seager were in agreement on a ten-year, $325MM guarantee. Jon Heyman of the MLB Network reported the limited no-trade protection and the $5MM signing bonus, as well as the absence of any form of opt-out clause.

Dodgers News: Treinen and May Take Next Steps With Big Postseason Roster Implications

Raza at the controls of high-flying Zimbabwe

Minamino chasing a Robbie Fowler record in the League Cup

Get Set For Massive NFL Week 1

Petrov stands down as Bulgaria coach after Georgia defeat

Bengals’ Listless Start Is More Than Just The Typical…