Israil Madrimov can take a step closer to achieving his World Title dream when he faces Michel Soro in a Final Eliminator for the WBA Super-Welterweight crown on another massive night for Uzbekistan boxing at the Renaissance Hall in Tashkent on Friday, December 17, with all of the action shown live worldwide on DAZN.

Madrimov (7-0, 5 KOs), the No.2 ranked Super-Welterweight with the WBA, outpointed the Democratic Republic of the Congo’s Emmany Kalombo, who had won all fourteen of his professional contests inside the distance before facing ‘The Dream,’ last time out at the Humo Arena in Tashkent on the undercard of Murodjon Akhmadaliev’s win over Ryosuke Iwasa.

France’s Soro (35-2-1, 24 KOs) is ranked No.1 in the world at 154lbs with the WBA and secured mandatory status in 2018 with a two-round wipe-out of the USA’s Greg Vendetti. The reigning WBA Gold World Super-Welterweight Champion scored a pair of knockouts over his compatriots Anderson Prestot and Cedric Vitu in 2019 but hasn’t fought since.

Tashkent’s own Dilshodbek Ruzmetov makes his professional debut at Light-Heavyweight, undefeated Lightweight Elnur Abduraimov (7-0, 6 KOs) continues his journey in the pros, and Super-Welterweight prospect Ikboljon Kholdarov (1-0) looks to build on his pro debut win back in April, and Super-Middleweight Bektemir Melikuziev (7-1, 6 KOs) looks to bounce back from his first career loss to Gabriel Rosado in June. 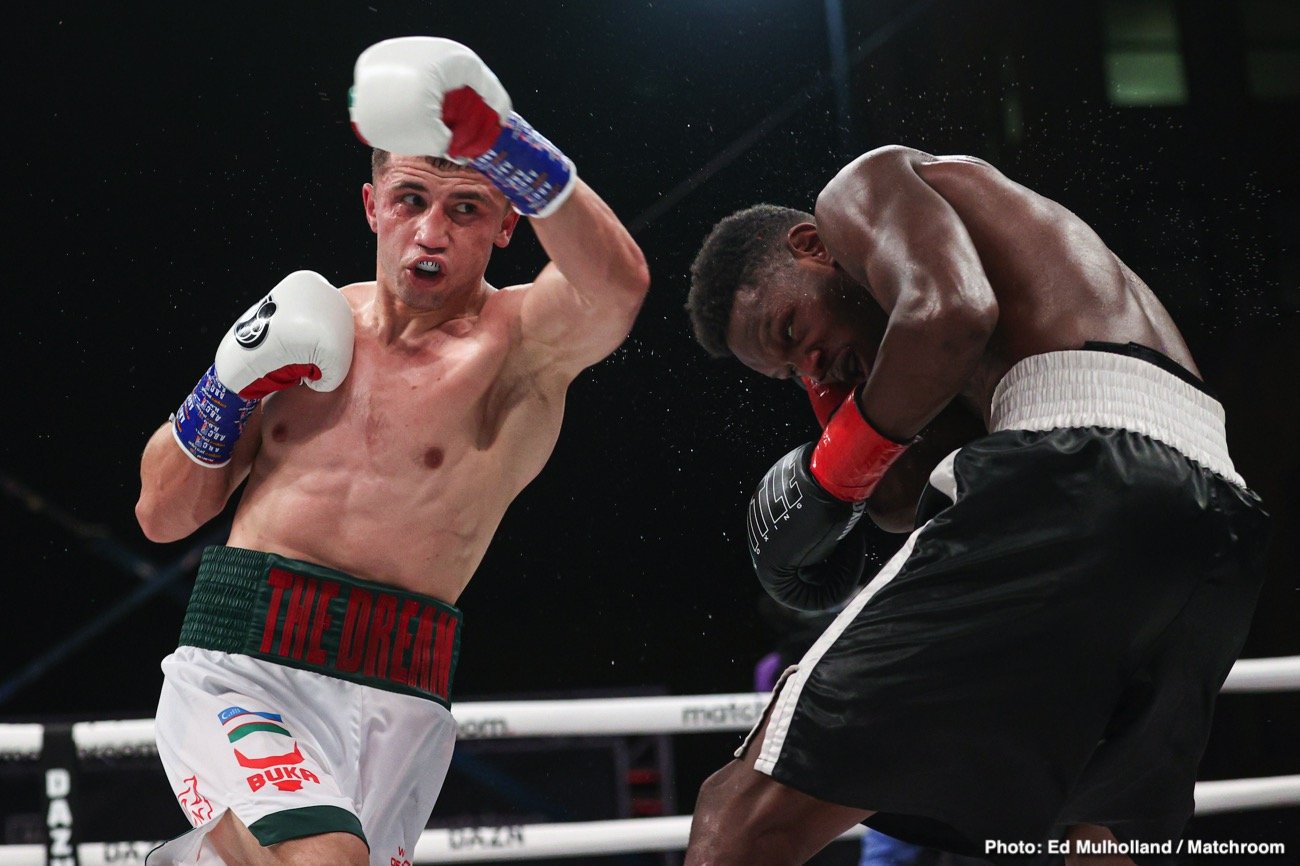 “We’re bringing DAZN back to Uzbekistan,” said Madrimov. “I’m happy to fight in Uzbekistan in front of my people. Fighting Soro is a big and critical step towards my goal, and I rate him as the best Super-Welterweight who doesn’t hold the belt. It will be an exciting fight for the fans worldwide.”

“I am looking forward to December 17, when I will take my final step before challenging for the World Title,” said Soro. “My opponent Israil Madrimov deserves respect as he dares to face me with only seven professional fights behind him. But I am ready to beat anyone, anywhere. I will prove it on December 17, and I will prove it again when I become World Champion.”

“We are delighted to be returning to Uzbekistan for another huge night of boxing following our World Championship card at the Humo Theatre back in April headlined by Murodjon Akhmadaliev,” said Frank Smith, Matchroom Boxing CEO. “This time it’s ‘The Dream’ Israil Madrimov who brings big-time boxing back to his homeland as he faces Michel Soro in a Final Eliminator for the WBA Super-Welterweight World Title.

“Madrimov vs. Soro is part of a stacked December for us on DAZN that gets underway in Bilbao this Friday as Kerman Lejarraga defends his European Super-Welterweight crown against Jack Flatley. Then it’s over to Las Vegas the following evening for Devin Haney’s defense of his WBC Lightweight World Title against Joseph ‘Jo Jo’ Diaz Jr. We end the year with a bang in the UK as Conor Benn and Katie Taylor headline in Liverpool on Saturday, December 11 and the following week it’s the massive rematch between Joseph Parker and Derek Chisora.”

“Our partners and we are always looking to bring top-tier boxing action to nations across the world, and we are excited to be in Uzbekistan once again on December 17,” said Ed Breeze, EVP Rights at DAZN. ” Madrimov vs. Soro will be a cracking fight and will kick off a stacked weekend of boxing which includes Parker vs. Chisora and Ramirez vs. Gonzalez, live worldwide on DAZN.”

‘You just have to find a way’

Pivotal for Packers to try to hold onto Marquez…

3 Raptors assets that could be traded to Nets in Kevin…