The Dodgers head into their season finale riding a three-game losing streak. A win today would give them 111 on the season and set a new franchise mark for best winning percentage in a season. Also on the line are a couple personal chases for Freddie Freeman, who is four hits away from 200 and four points behind Jeff McNeil in the NL batting average race.

Clayton Kershaw will take the mound for the Dodgers for the second time in the series, having hurled six shutout innings at the Rockies on Friday night. Kershaw is 11-3 with a 2.30 ERA this season, with two of his losses coming against the Rockies in Colorado, where baseball should never be played.

Kershaw has faced most of the Rockies hitters quite a bit, and Randal Grichuk, Garrett Hampson, and Elias Diaz have had the most success against him. Well, not counting Brendan Rodgers, who is lousy against everyone except L.A. and turns into Ted Williams when facing the Dodgers.

After a 2-for-4 night tonight, Brendan Rodgers is now batting .246 against all the non-Dodgers teams this year and .412 against the Dodgers.
https://t.co/A8tIpFaz0N

The Rockies will counter with Austin Gomber, who hasn’t made a start since July 17 after being demoted from their rotation two different times this year. The main return piece in the trade that sent Nolan Arenado to the Cardinals, Gomber has posted a 5.62 ERA for Colorado this season. And he’s not just another victim of Coors Field — his 5.25 ERA at home is actually nearly a run better than the 6.16 he’s posted away from Denver.

Justin Turner is the only Dodger with at least 10 plate appearances against Gomber, and he’s 6-for-7 with three doubles, a homer, and three walks against him. That’s a 2.614 OPS, which is really good.

The Dodgers are going with a pretty traditional lineup today, with the main surprise being Joey Gallo getting a start against the lefty Gomber. Dodgers manager Dave Roberts likely doesn’t expect Gomber to be in the game for long, hopefully because the L.A. offense knocked him out early. In all, five lefties get the start. 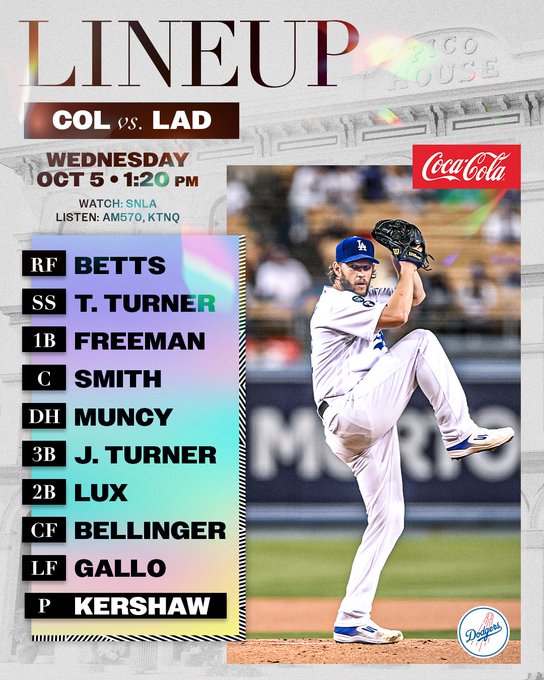 A Green Wave Washes Over The Cotton Bowl

Errol Spence vs. Yordenis Ugas on April 16th at AT&T…